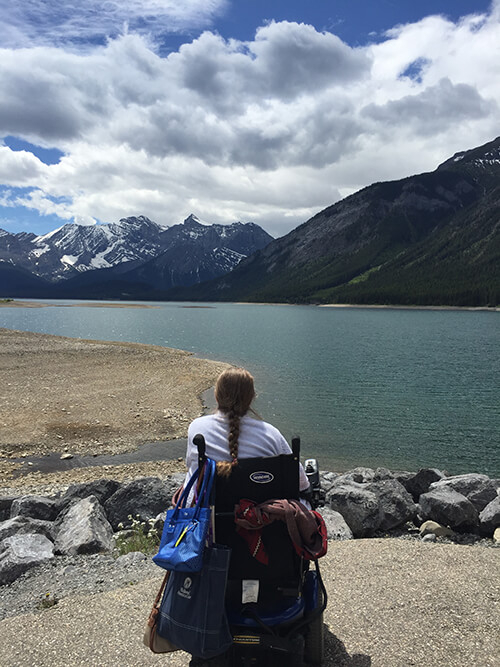 My Story with an Autoimmune Disease

This is my story with an autoimmune disease.

As you read through the long list of facts of my story – facts that I put in so you would appreciate all I experienced trusting you would get the picture that I can empathize with you on the challenges of your journey.

What I did not mention was the emotional upheaval the fears, frustration, disappointments… in short all the struggles faced as one by one the world you knew is collapsing around you – home life destroyed, friends and family life altered, job shattered… and the joy and excitement you witness as you start gaining what you lost… I wish I had known EFT for every step of the way. EFT has a technique which I could have tapped on to release the stress of every emotion, every situation I faced.

I was diagnosed with Multiple Sclerosis in 2002… my story has a strange beginning because all I went to see a doctor for was a weird feeling in my ear causing me to think I had an ear infection… at the clinic the doctor did the examination and concurred with me and wrote out a prescription.

The next night I was sitting having dinner with my mom and a strange sensation went down my left arm. It was so subtle and only lasted a second as it quickly flowed to my wrist and faded away. So afterwards it was hard to know if this feeling was real… but my mind was confirming, “something did happen.” So, I asked my Mum, “How do you feel when you’re having a stroke.”

She stopped what she was doing, and turned, looked at me and said strangely, “Well, I don’t know Heather, but why would you ask?”

Our first thoughts were, I was maybe having an allergic reaction to this drug, and so we read the information that came with it. There was no allergic reaction mentioned that seemed like what I had just felt in my arm, but it did say if you feel anything come into the clinic. And so, we did…

Already my fingers were beginning to feel like pins and needles as if, I sat on my hands all night. But I hadn’t they were glued, white knuckles to the steering wheel as I drove through the evening to a larger clinic (more like an emergency room).

The doctor who saw me there said I had many different symptoms with different diagnosis but nothing followed through so it wasn’t conclusive.

At this time the Province of Alberta was deregulating from electricity and the company I was working with was heavily involved in this process. I was putting in approximately 200 hours in a four-week period.

So, I suggested to the doctor, maybe it’s just my body trying to tell me to back off. And he responded by saying, “That’s as good a diagnosis as I could give.” Then he asked me, “But why do you think you have an ear infection, your ear is perfectly clear.”

The next day at work, I couldn’t even use my fingers to type and so a coworker took me to the emergency at a hospital. The doctor I saw there agreed with the other doctor who I saw last evening saying that I had symptoms of several diseases but nothing that followed through. He was however, the first doctor to suggest MS as a possibility.

I feel my real journey begins here, as from those simple words my mind began asking me what is happening as I began eating, breathing MS… my next place to go was the neurological department at another hospital.

First was a cat scan to rule out stroke. Next was the horrific experience of an MRI. Yes, I clearly remember the gyrating, banging noises of that first MRI as I was slid into the centre of the machine. And then the whirring sounds, as I lay there thinking I had just been thrust into a coffin.

But as I was running around to various clinics, appointments at the Neurological department, my body was showering me with all kinds of symptoms.

When the MRI results came back, I was told the diagnose, and the doctor’s exact words were, a “possibility” of relapsing, remitting MS and in fifteen years you’ll be in a wheelchair… I threw up. He left the room, muttering under his breath “virus.”

(The diagnosis of “possibility of a MS” is made because unless you have two exacerbations it cannot be confirmed.) I prayed I wouldn’t have a 2nd one.)

It was explained to me around this time is how the disease affects you, is where your lesions are in your brain – from the original tingling feelings on my hands; I could not sleep on my back because the pressure on my head caused excruciating pain.

I would often lay awake at night worrying whether my hands that felt like solid blocks of wood at the ends of my arms would be able to function like hands in the morning.

My sausage sized fingers, were so sore, at the end of these arms …

Not to mention the overwhelming exhaustion.

The symptoms I was now dealing with where bristles in the hands, tingling down the left arm, “bands” around my neck like what I would expect a collar to feel like. I noticed especially the bands when I was stressed. By spring 2003 most of my symptoms had resided except for the bristly feeling in my hands.

However, my reprieve from MS was short lived because towards the end of May 2003, I started having problems with my feet and legs, rectum and lower back. I knew I was facing my 2nd exacerbation and the final step to a confirmed diagnose.

There was a constant burning sensation in both feet which on the left leg would go as high as the mid-calf but on the right leg would go up to the hip. On both legs these sensations would migrate even daily. I felt I could trace the nerve endings in my feet (made me think of chicken feet) along the soles to the toes. My feet are very swollen. This gradually minimized to a feeling of cut glass on the soles of the feet. Having things like stockings and shoes further irritated me – nylons on my legs was like having barbed wired pulling on the flesh of my legs. (I would only wear sandals until the snow started falling but that was often mid-October.)

There was a lot of pain in the hip that would stiffen at night and by morning it would be difficult to get out of bed. My chiropractor would work around the sciatic nerve and she made the statement that “something has destroyed your nerve system.) That something was Multiple Sclerosis.

I also started getting sensations in my mid-section from the breasts down, of “bands”. It was not painful but quite uncomfortable. My skin often felt as if there was a second layer underneath and in between felt chilled.

But with every exacerbation, there is a reprieve – although every time you lose something you do not gain back.

Mid-March (2004) I noticed my left leg was not responding. I was starting to stagger. I could not direct it to go where I wanted it to, i.e., putting on my shoe. It was like a log.

I continue to have a constant the “bristly” feeling in my hands, “bands” in my torso, “bristly” on both feet and legs.

In January 2008, I was rear-ended (it was a very slight accident) but caused an exacerbation of my MS and could not even stand up. I was put on short-term disability. I was never able to resume all my personal home duties. Slowly, MS was controlling my life.

More things were happening in my journey – a fall produced a dislocated left shoulder, (my balance had become a serious problem, because for one thing the sensation in my feet was such like I was walking on puffy pillows). I was back on STD again.

Six months later, I fell again and broke my left knee cap. This time, I was in a rehabilitation central because of my MS I was not able to go home. I was again back on STD which eventually became LTD – I never returned to work.

Like many people with MS, I was very interested in the news about the Liberation treatment or CCSVI. I chose Costa Rica and travelled there in January 2011.

The sad part of this was I also picked up a very viscous UTI while there, which resulted in one UTI after the other – and by the 1st of April they had developed into a kidney infection and again I was taken to the hospital by ambulance for treatment.

Sadly, I never came home from there –

I could not manage to walk so I was sent for rehabilitation. This facility managed to rehabilitate me but not enough for me to return home and I was sent to long-term care. The first place I was sent, was for very elderly, dementia people.

To end this story on a high note, I have been working hard. And to-date have gained back the ability to transfer myself and manage many other daily living tasks. I am working daily with the physiotherapist to regain walking with a walker.

I live not so much with pain, now but I do have altered sensations in my extremities… numbness, tingling… but there are ongoing frustrations in my life, the difference is – now I do have EFT

Here’s to tap-tap-tapping it away…

Book Your Free Consult
Have you heard of neuroplasticity? →